Every once in a while I have to include a picture of Ippie the Tech Wizard Kitten. So here she is, relaxing on the bed. This blog post was brought to you by the letter C.

Earlier this week I had maintenance come in to unclog my tub drain and fix the wall heater. Because my management company has the foresight to contract with professional plumbers, there was a separate work order for the tub. When I put in the maintenance request I told them I have a cat and that I prefer to be there when they do the work, so I can make sure Ippie doesn’t try to make a break for it. Apparently it was a slow day in the office because the person who took down my info got creative on the order form (look at the Notes field, just above “Slow tub”): Then while the maintenance guy was fixing the wall heater, he pulled it apart & found this inside:

Mossimo, after all we’ve been through? How could you?

Ippie, this doesn’t really surprise me, seeing as you’re from the rather dodgy side of town. 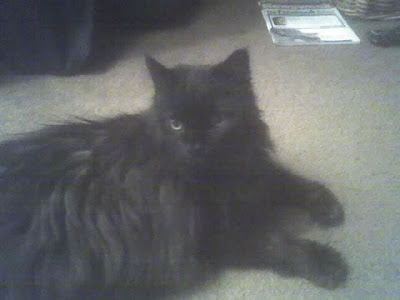 Today we celebrate the birth of a living legend. His feats of agility and cunning are known to many, and loved by most. His skills in pimpery are a testament to his keen psychic ability to determine who holds the cheese, or ice cream, or possibly a burger. He is known by several names: Pook, Moss, Darkness, Fluffernutter, Fluffers, Kit, and You Little F****r. You, dear blog reader, know him as Mossimo.

It’s quite possible Puss In Boots from Shrek (at right) was based on Mossimo’s skills, for Moss has mastered the “Can’t-you-see-I’m-just-a-poor-little-kitty” look that Puss in Boots used to great effect in the movie. This look has netted Mossimo many, many benefits. If he carried a wallet, I’m sure it would constantly be full of cash. Within 5 months he has completely charmed Joe, getting everything from food to cigarettes (well, more like outdoor smoke breaks) from him.
Anyone that has ever had a cat in their life know that they do not own the cat, the cat owns them. This is definitely true of Mossimo, for everywhere he goes, people just fall all over themselves adoring him. And even if I’m pissed at him for attacking my feet, trying to trip me in the kitchen, or clawing my leg in an attempt to get some cheese, I am Mossimo’s biggest fan by far. Happy 15th birthday, Moss, you furry little pimp. Your gift is on its way. 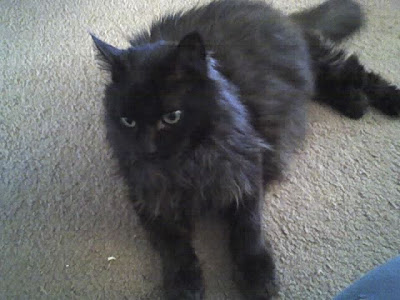 Let’s play Evil Genius and His Cat, okay? I love that game!
*Not her real name.