Like most women, I have a list of male celebrities that I find very handsome and boink-worthy. For some reason I tend to forget who gets me all ferhoodled, but lately I’ve had conversations with other women about my “Top Five” and it’s forced me to pay closer attention. Beth is pretty good at keeping her celebrity boyfriends list updated, so I guess there’s no reason why I can’t post mine. With very sexy accompanying photos, of course.

Chris Nunez is at the top of my list and it’s all Joe’s fault. He likes to watch “Miami Ink”, a reality show about a tattoo shop owned by Chris and fellow tatted hottie Ami James. When Chris is on screen, I get all giggly and can’t stop grinning. Interestingly enough, Joe looks a little like Chris, which works out to his favor as well as mine. What is it about tattooed Latino men with nice arms and pecs that gets me all goofy? Actually, who freakin’ cares?

Jon Hamm is a close second. I couldn’t find a decent picture of him as Don Draper, the successful, sexy, and mysterious advertising executive on “Mad Men”, so you’ll just have to watch the show to see how yummy he actually is. Apparently he’s been around for a while, doing work on “The Division”, “The Unit”, and some other short-lived TV series. His character on “Mad Men” makes me wish that all men dressed in well-cut dark suits and drank whiskey on the rocks. Whew.

If you’ve been reading my blog for a while, you know I have a weakness for men that can sing and dance. That being said, I love Hugh as Wolverine in the X-Men movies, all buff and growly and tough. I also loved him in The Fountain, a very existential metaphysical flick about love, time, and transcendence. And don’t get me started on The Prestige, which featured not only him but Christian Bale, another fine looking man that nearly made my Top 5.

I’m still a little sad that Clive Owen did not get asked to play James Bond, even though I’m very happy with Daniel Craig as 007. I loved Clive in Closer and Croupier, but I didn’t really like Children of Men – the plot was too gloomy and way too plausible for me to really enjoy the movie – but watching him is always a treat. I’d like to see Shoot ‘Em Up if just to see Clive with the very lovely Monica Bellucci. Who doesn’t enjoy watching beautiful people make out with each other?

Julian McMahon tends to play major assholes, but he’s so delicious in his villainy that I can’t help but drool. I first noticed him as Cole/Balthazar on “Charmed”, then moved on to watch him play the lusty plastic surgeon Christian Troy on “Nip/Tuck”. I love how nearly every episode includes some crazy sex scene between Christian and a patient. These scenes invariably include Christian’s bare ass. Nice buns, Doc!

Not only does Daniel Craig make a yummy James Bond, he also seems like a really nice guy. I also love the fact that he found out he would be the new 007 while shooting The Invasion in Baltimore, my old stomping grounds. He’s a little craggy and beaten-up looking (imperfection is rather sexy to me), he cleans up real nice, and he has that awesome accent. Lord have mercy.

His role as King Leonidas in 300 put him smack-dab in the middle of my radar. Could it be that watching him in IMAX, on a 7-story-high movie screen, stunned me into submission? Possibly. The fact remains that he is a fine man with a fun Scottish accent. Yeah, I love accents. Is it obvious?

I have been smitten with Christian Bale since I saw him in American Psycho, all buff and smeared in blood. Gross, I know, but damn, he was fine. T-Wizzle and I went to see Batman Begins and at one point she turned to me and said, “I totally want to have sex with him.” Get in line, sister. I have relegated him to the runners-up list because if I don’t, my friend Violet will choke me, as he’s at the top of her celebrity boyfriend list.

Oh, George. You had me at “Roseanne”, with your awful haircut and cheesy lines. Then there was “ER”, with your idealistic pediatrician desperately in love with a nurse. The kicker, though, was your roles in Out of Sight, Ocean’s 11-12-13, and O Brother Where Art Thou? Not only that, you seem like you’d be the perfect host: funny, friendly, and thought-provoking, with an awesome selection of wine and liquor and a great personal chef. I’m free next month to come stay at the house in Lake Como, by the way. And I won’t demand sex in return. Honest.

Ewan MacGregor
You know what I love about Ewan MacGregor? Yes, he’s versatile, funny, a very good actor. I loved him in Moulin Rouge and I cried with him when Satine (Nicole Kidman) died. But the big thing I love about him is that he has no qualms about doing nude scenes. I’m talking full-frontal here. And while I’m not pressed to see my favorite actors in the buff, it is a fun little treat to have on occasion, like making brownie sundaes at home.
So who’s your Fab Five, hmm? Dish in the comments!

Last night I went to see The Prestige with some friends from my Tarot Meetup group. If you haven’t heard about this film, it’s about the rivalry between 2 magicians, played by Christian Bale and Hugh Jackman, and the lengths they will go to in order to be the better, more successful magician. Scarlett Johansson, Michael Caine, and David Bowie also have roles in the film.

Having just come from a meeting on Tarot, I watched this movie thinking about The Magician card. It’s part of the major arcana, which consists of 22 cards that represent archetypes. The major arcana also represent situations and psychological states of being. One of the most well-known cards in the major arcana is the Death card, which symbolizes transition, transformation, and letting go of the old so that the new can come forth. 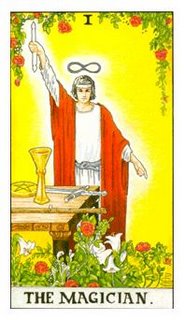 The Magician card in Tarot represents manifestation. It’s about applying your will to a situation and calling forth what you want. In many Tarot decks, the Magician card shows a man standing in front of a table that has several tools on it. He’s got one hand raised to the heavens and one hand pointing downward, as if to say “As above, so below.” Whenever this card comes up in a Tarot reading, it’s an indication that you have the tools at your disposal to create whatever you want – you just have to make the choice as to what you desire, ask the universe or God for it, and then allow it to unfold. There’s a shadow side to this card, though: you can also use magic and manifesting to manipulate or trick others. If you lack confidence in your ability to actively create what you experience, you may end up in situations that are less than ideal.

The movie illustrated both the light and the shadow side of the Magician card. The desire to be the greatest magician was so strong for Jackman’s character, Robert Angier, that he could not listen to reason. While he was loved, talented, and well-respected, Angier was so consumed with knowing how his rival, Alfred Borden (played by Bale), performed a certain illusion, that he manipulated and tricked others into helping him find out Borden’s secret. In the end, he learned the secret, but not without first manifesting a lot of pain and suffering for himself and those around him. While Borden wasn’t exactly a saint either, he released his desire to be better and focused instead on making a better life for his child.

Michael Caine’s character, Cutter, stated the 3 parts of a magic trick at the beginning and the end of the film:

The first act is called the pledge. The magician shows you something
ordinary—but of course, it probably isn’t.
The second act is called the turn. The magician makes his ordinary something do something extraordinary. Now you’re looking for the secret, but you won’t find it.
That’s why there’s a third act called the prestige. This is the part with twists and turns, where lives hang in the balance, and you see something shocking you’ve never seen before.

When I relate this structure to the Magician card, I think the 3 parts go like this:

The pledge is the vow you make. You want to create something new, better, or different in your life.
The turn is where you turn over the pledge to a higher power and say “If this is for my greatest good, make it so.”
The prestige is the part where your pledge is made manifest. Be careful what you wish for, though, because the vow will be taken very literally, and if you leave out important pieces, the prestige may not turn out exactly as you had pictured it.

I can tell you from personal experience that this method works. Try it out yourself with something small, like getting a great parking spot at the grocery store or shopping mall, and see what happens. I’ll be waiting to hear from you.